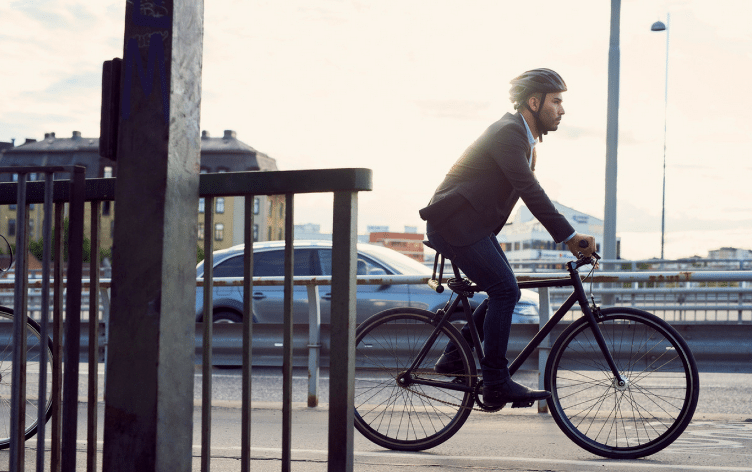 Car license plates have been around for more than a hundred years, and for good reason. By requiring a registered plate, car owners are forced to take responsibility for their actions when observed reckless operation occurs.

With the growing number of cyclists on city streets, some motorists have called for bicycle use to require license and registration, too. After all, cyclists are supposed to follow the same rules as any other vehicle on the street.

The debate was recently heightened when British outdoor company Halford’s released its Sharing the Road survey. Surprisingly, 59% of those surveyed would like to see cyclists register and display a license plate to make the roads safer.

Is this a reasonable request or an impractical regulation?

Cyclists are required to obey the same traffic laws as motorists. While most cyclists abide by the law, there are infractions that commonly take place. Whether it’s running a red light or stop sign, riding on the wrong side of the road or not using bike lights at night, motorists often think of cyclists as having an “above the law” attitude, which puts others on the road in danger.

By requiring cyclists to have a license plate, current registration and insurance, some motorists and lawmakers believe it will be easier to enforce penalties for cyclists who are creating an unsafe environment. Those who call for a change in laws also point to cities like Shanghai, which currently requires bicycle registration. The University of Colorado Boulder also requires registration in the form of a sticker placed on the seat post.

From the motorists point of view, making cyclists traceable helps prevent traffic infractions by holding every road user accountable for their actions.

Most of us who ride on the road also use motor vehicles. This means most cyclists already pay for road taxes, insurance and registration. By enforcing bike taxes and registration, cyclists will be forced to pay double.

There also is no distinction made between cyclists. Urban commuters ride in a different environment than long-distance road cyclists or mountain bikers who utilize cycling for fitness benefits. Which begs the question: Should a trail rider be required to register and license their bikes? Can a child who rides a bike be forced to pay road taxes?

From a cyclist’s point of view, riding a bike provides freedom and cheap transportation that promotes health and wellness, is good for the environment and creates less congestion on city streets. Enforcing such laws could discourage people who don’t want to deal with the additional bureaucracy from riding their bikes.

In Switzerland, bike registration was required until 2012. Administrative burdens, the cost of implementation and enforcement and the fact most cyclists are already covered by their vehicle liability insurance were major reasons the program eventually failed. The revenue generated by the program also didn’t cover the costs of administrative fees — leaving the cost to taxpayers.

While the argument can be made from either side, the reality of the situation is a lot of people who ride bikes can’t afford the costs of alternate modes of transportation. Yes, some motorists will continue to see cyclists as a problem or obstacle that has to be dealt with — even if the benefits of cycling for the entire population far outweigh any problems caused.

Cities with the highest quality of life are also often the same cities that have the highest numbers of cyclists. Making cyclists pay more money to operate a human-powered machine won’t likely fix the few bad apples who choose to disobey road laws.

As cyclists, the best way to prevent such laws from gaining steam is to support your local bike advocacy groups and have your voice heard. Though the conflict between motorists and cyclists won’t likely end anytime soon, educating the public on the benefits of cycling and why improved cycling infrastructure can help solve many of the problems that currently exist is the way to go.